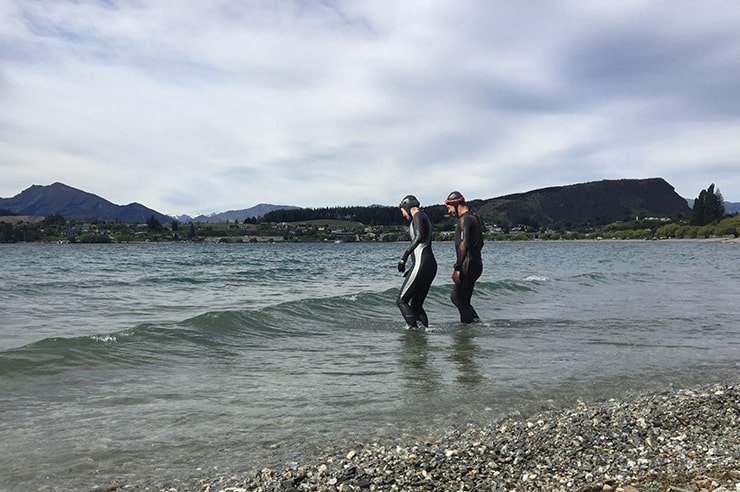 Kristy had always pencilled in the start of November to introduce me to the lake. The spring weather however forgot that we were waiting for the lake to heat up a little. Although the water temperature did get up to about 15 degrees a couple of weeks ago, a cold snap and more snow melt from the mountains cooled it down to around 12 degrees again. The spring winds in Wanaka also decided to come along to play, though we decided we needed to do this!

The intention was to get into the lake, splash around a little and see if I could get reasonably comfortable and not get freaked! We met down at the lakeside, I put on my Blueseventy Reaction wetsuit and Blueseventy neoprene cap. I knew the ice-cream headache was probably on the way once I was in the water but thought I’d give myself a fighting chance with some decent equipment.

We walked into the lake with the wind-blown waves coming in, not the nice flat day I had been hoping for. There was much hilarity and significant coldness. I managed to stub one of my toes on a rock, though fortunately my feet were getting that cold it didn’t actually hurt too much! Once getting a feel of being in the water and beginning to lose feeling in my hands too, we splashed water on our faces to acclimatise to the temperature, then I tried floating face down for a bit. It felt great, as I mentioned previously the buoyancy that the wetsuit provides is amazing, I thought “You know what’ I can float here all day”. Next, we walked out a little further then swam back to shore. Again, it felt great! We did this a couple more times, although it was probably only about a 15-metre swim each time, it felt like winning!It really reinforced that I can actually do this. This was all possible by Kristy making me feel so at ease and re-assured in the lake, with her help over the next while we’ll start swimming out a little further in the lake to get the feel for it. Hopefully it’ll be a little less choppy next time too!