My fear was the biggest tool to my achievements 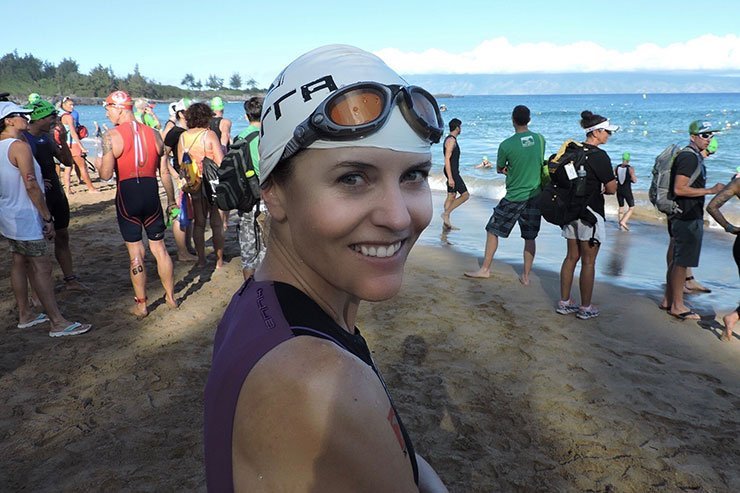 Approximately four years ago I decided that I wanted to conquer my debilitating and irrational fear of water. My fear was not only of being in the water but simply walking next to it. Looking into deep water was enough to make my heart race. I decided that to overcome this I would give myself a goal, a goal to compete in a short sprint triathlon. I was already OK at running and reasonably capable on a bike but getting into the water was going to be a massive challenge.

I decided to hit the pool for the first time since childhood. I was only able to swim or at least attempt to swim in the centre of the pool as I was terrified of anything unusual in the like vents and grates down the sides. Even the lane marker lines on the bottom made me uncomfortable. I couldn’t swim more than 10 metres before I had to stop. At that point I decided I needed some assistance, so I enlisted the help of a local swim coach Merryn Johnston and explained my predicament. She wondered about whether I might need to see a psychologist rather than a coach but decided to help me anyway. It was the best thing I could have done as she has supported me in the most caring and sensitive way possible. She is still my coach and is also now one of my best friends. Merryn read out her notes from our first swim session to me recently and it said, “Kristy managed to touch the bottom of the pool today and by the end of the session she had learnt how to do a dolphin dive”.

From there we headed to the lake into knee deep water where I can remember feeling the most horrific panic, but I tried not to let it show. Merryn discussed that the weeds on the lake bed were a habitat for fish and if you look at them closely they are actually quite beautiful when they sway in the gentle waves. I had, and still have, this irrational fear. I liken it to someone who fears spiders whilst holding one in their hand. It’s not that I am going to drown, it’s not that anything is going to harm me but a pure fear of what I might see. Logs, rocks, buoys, jetties, weeds and even rubbish are enough to make me panic, even to this day! I have learnt how to control my panic and know that when the gun goes off, none of that matters to me because I seem to be able to shut it all out now.

The small triathlon I had chosen had a 300-metre swim in a cold, weedy lake with a horrendous crowded start and it was to this day one of the worst things I have ever done. I hated it but completed the triathlon finishing 2nd. I thought: “Hmm that still isn’t good enough for me, I need to do a ‘real’ swim”. So I entered Xterra Mototapu which was to be held two months’ later. I worked hard and despite my intense trepidation I can say that I nearly enjoyed the swim and surprisingly came home first in my age group. I felt proud to have achieved not only my goal of swimming in a triathlon but also of qualifying for the 2015 Xterra World Championships in Maui. Something I would have never dreamed to be possible.

I headed to Maui feeling totally overwhelmed by it all but knowing the hard work I had put in would mean that I was capable of completing the course. At that stage that was my goal. I had never swum in waves before and I remember sitting at the beach two days before the race watching the massive surf crashing with tears rolling down my face thinking “how can I possibly do this’”. Somehow I managed it and finished 6th equal and I have never looked back. I have continued to take huge leaps and bounds since then and have swum in all sorts of places and conditions. I can still feel emotionally drained after an open water swim but I am slowly getting better each time.

I am proud to say that I am currently the Xterra World Champion in my age group and this year have been racing as a professional athlete on the World circuit. I am going to keep pushing myself to improve but now is my time to share my passion and learning with others… my next big goal.

I believe that barriers in life are to be challenged and eventually broken. I would encourage anyone to tackle their fears and to feel the empowering rewards of smashing that barrier down.