The Joy of Wetsuits 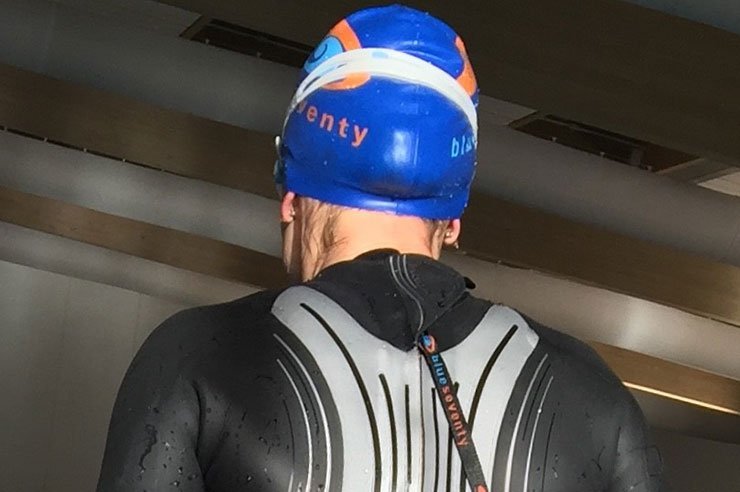 One of the highlights in my swimming journey so far has been the pull buoy. This handy little swimming aid acts like a comfort blanket for me, I feel relaxed when using it and can swim long (for me) distances without any real issues. I still find once I need to leave the safety of my little pull buoy behind then my swimming can still go to pot, sometimes after a remarkably short time. Kristy had suggested that I should try a swim in the pool with my wetsuit on to give me an indication of what it would be like to swim in a suit with all the extra buoyancy that it provides, and I was all for finding out what it felt like.

The wetsuit I had managed to acquire is a Blueseventy Reaction which was a suit that nearly all of my lake swimming friends had recommended. I had never swum in a wetsuit before so of course the first hurdle for me was to put the thing on to begin with. I’m glad that putting the suit on will never be a timed transition in a race! Blueseventy have some tips on how to put a wetsuit on correctly. Once I had managed to put the suit on it was time for the pool swim experiment. I had pretty high hopes for how it would feel to be in the water, as everyone I knew who swam in one said it made a huge difference to feel and speed in the water.

Getting in to the pool straight away I could feel how buoyant I was going to be, I could lie and float on the water normally, but this was a whole new level. My legs were no longer ‘sinky’. When I swam without the wetsuit on, I would push and glide from the end then take a breath on my first right stoke, typically this would be around the 5-metre mark. Doing the same push, glide, stroke I was already about 8 metres down the pool and it all felt so much faster. As an aside, thanks to the awesome Emma Ferris and her breathing coaching, I no longer tend to breathe so early on in a swim and will take a few strokes first. Then for actually swimming, what a difference! It felt so much easier, faster, floaty and just so much more relaxing. Although my head position was too high (which is being worked on) I felt like I was actually swimming on the water rather than swimming with sinking legs and gained so much confidence that this swimming malarkey might just be possible after all! It was interesting that I did not notice any restriction with my arm movement with the wetsuit on which says a lot for the design of the suit. I did find the neck line a little tight although I am sure I will get used to this after a few more swims. Wearing the suit in the pool was also pretty warm which again bodes well for when we head to the lake later on the year as the adventure continues…bring it on!