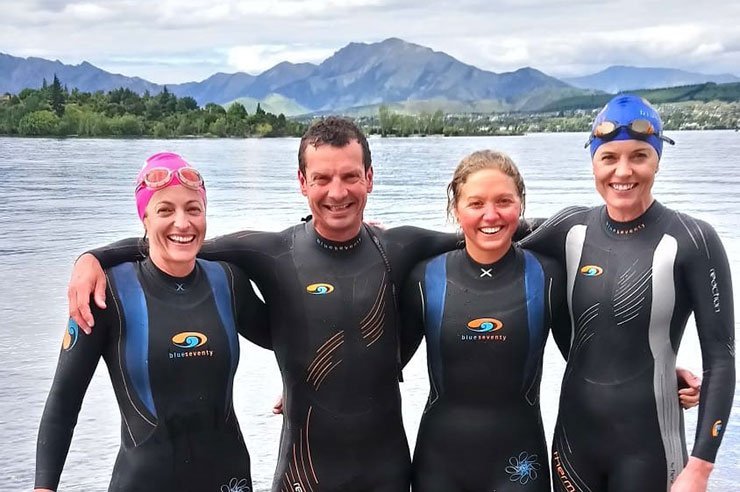 With less than 1 week to go until our 2.5km swim challenge ‘The Ruby’, we are tracking well towards making our goal of completing the event. Andy has been putting a lot of effort into gettinghimself into the lake as often as he can and with a variety of people. This hashelped his familiarity with the lake and its conditions and has equipped him mentally and physically for the challenge of swimming in close vicinity to others.

A few weeks back Andy and I along with two very supportive friends tackled the swim from Waterfall Creek where the race will begin to Ruby Island, the island that we will circumnavigate this coming weekend. We took our time on the way over to the island practising siting and then came back from the island in a much faster time with added confidence and honed skills. We made it as fun as possible and the result was a great success. Andy even managed an impressive jump off the jetty on Ruby Island, that in the past would have been something that he would never of have considered doing. This swim really boosted Andy’s confidence that he can achieve his goal.

Andy has also managed to compete in a short swim-run event and his first ever triathlon. These races boosted his confidence of being comfortable in a race environment. As can be expected, Andy is experiencing some trepidation for this coming weekend. Whilst feeling quietly confident that he can achieve this goal he has some concerns about how he might cope with waves and chop. It is something he has practiced and although it maybe isn’t his first choice of conditions, it isjust a matter of dealing with whatever is thrown at us on the day. Andy will be mentally prepared for as many situations as we can imagine. This week we are going to be working on our race plan, head space, final gear selection and pre-race nutrition.

To quote Andy from a few months back…. “Hopefully this year when the Ultra Easy competitors head up Roy’s Peak in a morning late January, I’ll be one of the swimmers making up that shoal heading out to the island. I’ll be a very happy man if I am.”